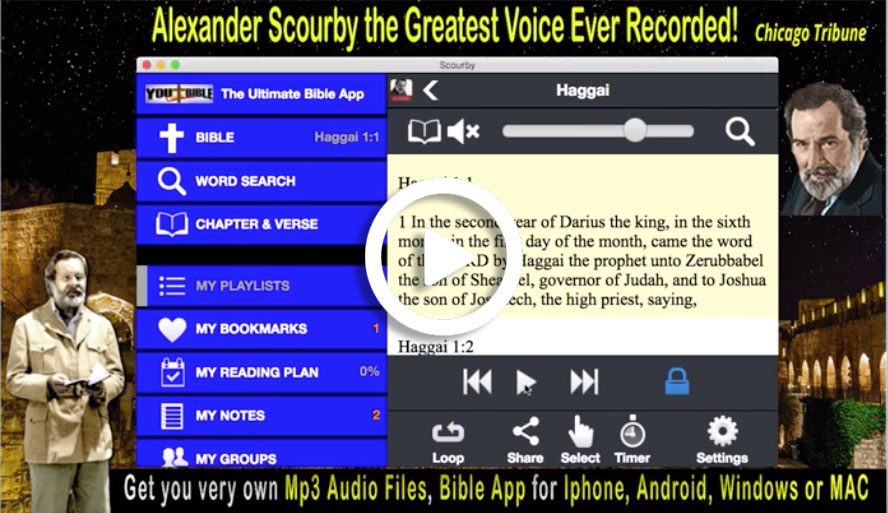 1 In the second year of Darius the king, in the sixth month, in the first day of the month, came the word of the Lord by Haggai the prophet unto Zerubbabel the son of Shealtiel, governor of Judah, and to Joshua the son of Josedech, the high priest, saying,

2 Thus speaketh the Lord of hosts, saying, This people say, The time is not come, the time that the Lord’s house should be built.

3 Then came the word of the Lord by Haggai the prophet, saying,

4 Is it time for you, O ye, to dwell in your cieled houses, and this house lie waste?

Commentary on Bible Verses:  God clearly tells them to consider what they were doing and they better listen to God.

6 Ye have sown much, and bring in little; ye eat, but ye have not enough; ye drink, but ye are not filled with drink; ye clothe you, but there is none warm; and he that earneth wages earneth wages to put it into a bag with holes.

Commentary on Bible Verses:  Because they don’t listen, they don’t have enough to eat and drink and their money doesn’t buy much

7 Thus saith the Lord of hosts; Consider your ways.

Commentary on Bible Verses:  Again God tells them to consider what they’re

8 Go up to the mountain, and bring wood, and build the house; and I will take pleasure in it, and I will be glorified, saith the Lord.

Commentary on Bible Verses:  God tells them to go and get the material to build the Temple.

9 Ye looked for much, and, lo it came to little; and when ye brought it home, I did blow upon it. Why? saith the Lord of hosts. Because of mine house that is waste, and ye run every man unto his own house.

Commentary on Bible Verses:  God tells them you build you own house, but my house is not built.

Commentary on Bible Verses:  So, their won’t be rain and no food will grow.

Commentary on Bible Verses:  I will not bless your disobedience.

15 In the four and twentieth day of the sixth month, in the second year of Darius the king.

2 In the seventh month, in the one and twentieth day of the month, came the word of the Lord by the prophet Haggai, saying,

2 Speak now to Zerubbabel the son of Shealtiel, governor of Judah, and to Joshua the son of Josedech, the high priest, and to the residue of the people, saying,

3 Who is left among you that saw this house in her first glory? and how do ye see it now? is it not in your eyes in comparison of it as nothing?

5 According to the word that I covenanted with you when ye came out of Egypt, so my spirit remaineth among you: fear ye not.

6 For thus saith the Lord of hosts; Yet once, it is a little while, and I will shake the heavens, and the earth, and the sea, and the dry land;

7 And I will shake all nations, and the desire of all nations shall come: and I will fill this house with glory, saith the Lord of hosts.

8 The silver is mine, and the gold is mine, saith the Lord of hosts.

10 In the four and twentieth day of the ninth month, in the second year of Darius, came the word of the Lord by Haggai the prophet, saying,

12 If one bear holy flesh in the skirt of his garment, and with his skirt do touch bread, or pottage, or wine, or oil, or any meat, shall it be holy? And the priests answered and said, No.

13 Then said Haggai, If one that is unclean by a dead body touch any of these, shall it be unclean? And the priests answered and said, It shall be unclean.

14 Then answered Haggai, and said, So is this people, and so is this nation before me, saith the Lord; and so is every work of their hands; and that which they offer there is unclean.

15 And now, I pray you, consider from this day and upward, from before a stone was laid upon a stone in the temple of the Lord:

17 I smote you with blasting and with mildew and with hail in all the labours of your hands; yet ye turned not to me, saith the Lord.

18 Consider now from this day and upward, from the four and twentieth day of the ninth month, even from the day that the foundation of the Lord’s temple was laid, consider it.

19 Is the seed yet in the barn? yea, as yet the vine, and the fig tree, and the pomegranate, and the olive tree, hath not brought forth: from this day will I bless you.

20 And again the word of the Lord came unto Haggai in the four and twentieth day of the month, saying,

21 Speak to Zerubbabel, governor of Judah, saying, I will shake the heavens and the earth;

Commentary on Bible Verses:  God tells them he will destroy their enemies if they just obey him and build the Temple.

The Jews failed to obey God’s Word and they were exiled years before Christ around circa 590 BC.  Exile implies that the Jews lived Apart from Judah. They were probably exiled in what is Iraq today and formerly known as Babylon.

King Cyrus was the King of Persia formerly Iran and defeated Babylon circa 540 BC. He then allowed the Jews to return to their home in Judah and told them build their Temple again. The Jews constructed the foundation of the temple with an altar to God.  However, the Jews spent 20 years building their own houses, but did not did not finish the Temple, therefore God a drought, causing their harvester to be bad and there was not much to eat or drink. There was inflation and their money would not buy a lot.

Haggai was a prophet and prophesied to the Jews telling them what God told him to say, about the same time as Zechariah, Circa 520 B.C., Haggai told the Jews that God was angry with them for not building the Temple and they must build it or suffer continued Judgments of God. This time the Jews listened to Haggai and they built the Temple is 5 years.

God then vowed to destroy their enemies, their chariots and horses and the riders.