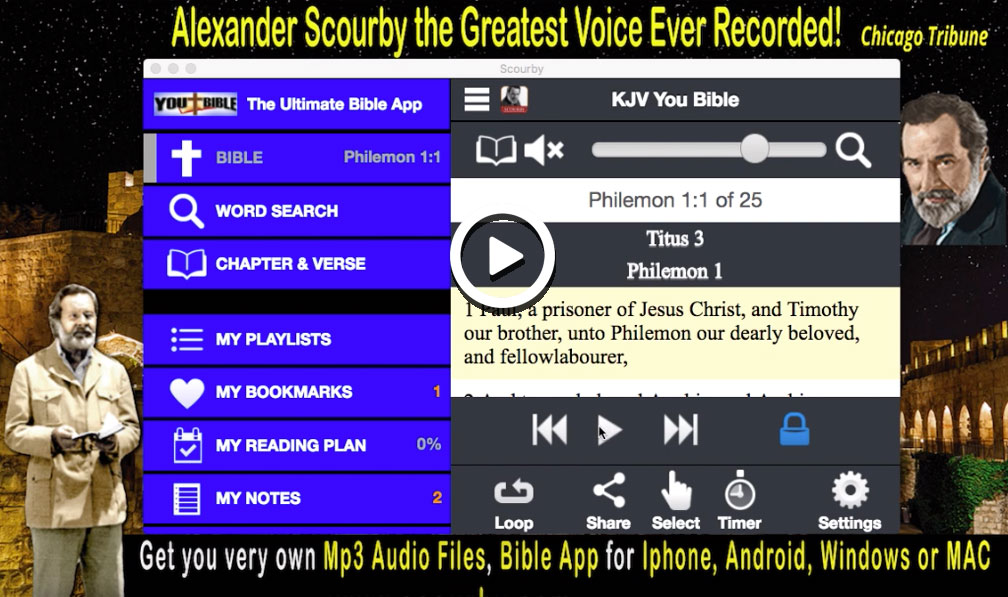 1 Paul, a prisoner of Jesus Christ, and Timothy our brother, unto Philemon our dearly beloved, and fellow labourer,

(Bible Verses Commentary: Paul is writing this letter in his older age and in prison in Rome. Who is Philemon? Not sure since he’s not mentioned in the Bible. This is short Epistle of 1 Chapter and only 25 verses. However, Paul does mention that Philemon is dearly beloved and fellow laborer. I take it that Paul had few problems with Philemon and they were in fact kindred spirits since this Epistle is not taking Philemon to task for any wrong doings or false teachings, but rather praising Philemon even saying in Bible Verse 21 that he would do more than Paul would say.

2 And to our beloved Apphia, and Archippus our fellow soldier, and to the church in thy house:

(Bible Verses Commentary: Paul greets others in this Bible verse, Apphia, likely was Philemon wife and Archippus, was likely the son of Philemon and Apphia. It appears that Philemon is holding church services in his house and therefore was a wealthy person who could afford to hold Church meetings in their home and sever those who attended.

3 Grace to you, and peace, from God our Father and the Lord Jesus Christ.

4 I thank my God, making mention of thee always in my prayers,

5 Hearing of thy love and faith, which thou hast toward the Lord Jesus, and toward all saints;

6 That the communication of thy faith may become effectual by the acknowledging of every good thing which is in you in Christ Jesus.

(Bible Verses Commentary: You can tell the Paul and Philemon are very close brother in Christ because Paul says here that he is praying for Philemon always. Paul says clearly that Philemon is a good man and hears that from others.

7 For we have great joy and consolation in thy love, because the bowels of the saints are refreshed by thee, brother.

(Bible Verses Commentary: This is more words of admiration from Paul who seems to saying that he is joyful and peaceful in prison and rejoicing in the fact that Philemon has become a evangelist for the Gospel under the teachings of Paul.

8 Wherefore, though I might be much bold in Christ to enjoin thee that which is convenient,

9 Yet for love’s sake I rather beseech thee, being such an one as Paul the aged, and now also a prisoner of Jesus Christ. (Bible Verses Commentary: Again Paul mentions he is older and a prisoner

10 I beseech thee for my son Onesimus, whom I have begotten in my bonds:

11 Which in time past was to thee unprofitable, but now profitable to thee and to me:

12 Whom I have sent again: thou therefore receive him, that is, mine own bowels:

13 Whom I would have retained with me, that in thy stead he might have ministered unto me in the bonds of the gospel:

14 But without thy mind would I do nothing; that thy benefit should not be as it were of necessity, but willingly.

15 For perhaps he therefore departed for a season, that thou shouldest receive him for ever;

16 Not now as a servant, but above a servant, a brother beloved, specially to me, but how much more unto thee, both in the flesh, and in the Lord?

17 If thou count me therefore a partner, receive him as myself.

18 If he hath wronged thee, or oweth thee ought, put that on mine account;

19 I Paul have written it with mine own hand, I will repay it: albeit I do not say to thee how thou owest unto me even thine own self besides.

20 Yea, brother, let me have joy of thee in the Lord: refresh my bowels in the Lord.

21 Having confidence in thy obedience I wrote unto thee, knowing that thou wilt also do more than I say.

(Bible Verses Commentary: It seems Paul had a reason to write this letter other than praising Philemon. Paul is asking Philemon to take his son Onesimus and treat him better than a servant. Paul also says he will pay whatever it costs Philemon. There is a hint here that at some point there may have been strife between Philemon and Onesimus, when Paul says, he departed for a season, and Paul asks Philemon to take care of him forever. That is a big ask, so this indicates every further that Paul had very close relationship with Philemon.

22 But withal prepare me also a lodging: for I trust that through your prayers I shall be given unto you.

(Bible Verses Commentary: Paul says that he hopes Philemon will prepare a place in his home or near his home when he gets out of Prison. This indicates that Paul had hope he would be released by the Romans, but of course he wasn’t and was eventually put to death.

23 There salute thee Epaphras, my fellow prisoner in Christ Jesus;

25 The grace of our Lord Jesus Christ be with your spirit. Amen.

Paul was a big disrupter of his day and was quite often beat up and thrown into prison for causing disruption in the various places he preached the Gospel. His Gospel message disrupted local businesses, such as idol trading and fortune telling and also disrupted others in power who were politically threatened by his preaching. Some believed his message promoted political subversion, sedition and incited riots.  Therefore, Paul was often beaten and put into prision and charged with those crimes. Being a Roman citizen he appealed to the Roman Emperor and was sent to Rome to be tired there. He was put into prison and thought to be put to death by decapitation as was the custom in those days. It was theorized that if Paul had not made an appeal to Rome to what he perceived as unjust treatment, he would have likely not been put to death and died of old age. However, Paul was a disrupter until the end.