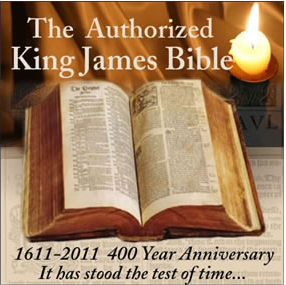 The King James Holy Bible was first published in 1611 via an edict from the King England, King James.  However, what many people don’t know, is that in England during the 14th  and 15th  centuries, the only written Bible was either in Latin or Greek.  Another thing that most do not know, was there was a law in England that made it a crime, punishable by death, for anyone who wrote or spoke the Bible in English. During that time many disobeyed that law, and those who were caught were sent to prison and later, put to death by burning at the stake. Below is a link to a couple of very interesting videos. One is a story of William Tyndale and how we got our first published English Bible. This is a short 28-minute video about William Tyndale’s effort to translate, and illegally publish and distribute, the Bible in English in 15th century England. William Tyndale was eventually captured and was burned at the stake for his crime of translating and distributing the Bible in English. His translated Bible would eventually become the 1611 King James Bible. This video will give all that watch it a new appreciation for the King James Bible and  the people who gave their lives so we could have a Bible in English.

The second, video is a short video about why the KJV Bible is still the best and most accurate English Bible on the the market today. Revelation 22:19 says this:  “And if any man shall take away from the words of the book of this prophecy, God shall take away his part out of the book of life, and out of the holy city, and from the things which are written in this book.”

So the answer to the first question about why are there over 100 different translations of the English Bible today, is that it’s all about money and how to make money off of a new copyrighted English Bible. Do you remember the story about when Jesus beat the money changes out of the Temple? That was all about money as well.

Take a few short minutes and watch these two powerful videos about the origins of the King James Bible, and how it compares to the newer translations. You will discover why the King James Bible is still the most accurate Bible version on the market.  We guarantee you two things, (1) you will learn some new truths you never knew before, and (2), it will give you a new appreciation for the original Word of God, the King James Bible.