Scourby has the Greatest Voice Ever Recorded

Alexander Scourby is reputed to have been the world`s best audio-book narrator, bar none. He is heralded as having the greatest voice ever recorded. Scourby, a radio, film and stage actor, read 422 books for the Talking Books program of the American Foundation for the Blind, including Homer`s “Iliad,” Tolstoy`s “War and Peace,” Joyce`s “Ulysses,” Faulkner`s “The Sound and the Fury” and the King James Version of the Bible.

Although Scourby considered Talking Books his most important work, he also made several recordings for Spoken Arts and Listening Library, and it`s well worth the purchase price to hear the master. 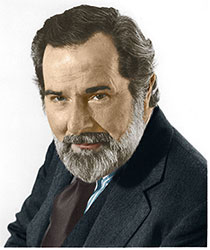 The precise, mellifluous voice of Alexander Scourby, trained in Shakespearean roles in the 1930s and perfected in radio dramatic parts in the 1940s, became a well-known sound on Broadway, in motion pictures, and on television, whereas Harriet Van Horne has observed, he is “the most sensitive and knowing narrator in the business.” His most appreciative audience, however, is found among the nearly 80,000 borrowers of Talking Books, the recordings of literature produced under the supervision of the Division for the Blind of the Library of Congress for the use of the legally blind.

Scourby, during his lifetime, recorded over 500 books for the blind and has described his recording of Audiobooks as, “the one work that really means something to me. “Nelson Coon, a former regional librarian in the Library of Congress observed in the letters column of the Saturday Review (September 9, 1961): “The dependence on and satisfaction in the Voice of Alexander Scourby among the blind is something you would not believe unless you had been a librarian.”

However, the Audio Book that Alexander Scourby was proudest of was his narration of the King James Holy Bible. Millions of records, cassettes, CD’s, DVD’s, digital downloads and the Scourby You Bible Apps have been sold around the World. The bestselling book has become one of the best selling audio narration of all times and to this very day, Alexander Scourby is still recognized as having the Greatest Voice Ever Recorded. Scourby was the first to narrated an Audio Bible in 1953 and since the first recording his gifted voice has brought, and continues to bring, comfort, joy, and inspiration to untold millions all over the world. That has earned him the well-deserved title as “The Voice of the Bible”. Although Scourby recorded over 500 different books, he considered the Bible to be his most important. He describes why in the following statement:

“The Bible is the one book that I am proudest of. It has the power to inspire, encourage and change the lives of people who hear it. I know this because, over the years, many people have written me thanking me for recording the Bible. I have been greatly humbled and moved by the many letters I received from people around the world telling me how God used the Bible narrations to comfort and encourage them during a difficult period. Others stated their lives, or the lives of their loved ones were changed simply by listening to the Bible. Others stated that they were even healed as they listened to the Bible. I really stand in awe in pondering that nothing else I have done during my entire lifetime has had such a powerful and positive impact on people as my recordings of the King James Bible. I offer you the most rewarding gift you will ever have an opportunity to give someone you love … the recording of THE King James BIBLE …the world’s most important book and a gift of a lifetime for anyone who receives it.”

The American Foundation for the Blind offers to the 450 agencies concerned with the estimated 400,000 sightless persons in the United States more than 100 services that would be difficult or impossible for individual agencies to provide on their own. The Talking Book service was conceived by Dr. Robert B. Irwin, then executive director of the Foundation, after a survey in 1929 which revealed that only 15 percent of the sightless population was sufficiently skilled at touch reading to enjoy books in Braille. In 1934 an act of Congress authorized governmental financing of the project and the American Foundation for the Blind, under the supervision of the Library of Congress, began issuing readings of complete books by professional actors on long-playing records. As many as 500 Talking Books of fiction, nonfiction, drama, and poetry were produced annually (partly by the AFB and partly by the American Printing House for the Blind, and distributed by the Library of Congress to thirty-two regional libraries serving nearly 80,000 blind borrowers.

The Talking Books that Scourby recorded for the blind number in the hundreds and range from the King James Bible and the “Iliad” to Gilbert “Highet’s Talents” and “Geniuses”. The majority of the recordings are novels, both contemporary, such as “Ship of Fools” and classic, such as “War and Peace” and “The Idiot”. Besides his work for Talking Books, Scourby did readings for his own company, Lectern Records. Paraphrasing Gregory Ziemer, the director of public education at the American Foundation for the Blind, Kevin Wallace in the New Yorker (November 3, 1962) has said that Scourby “rates as high with Talking Book fans as Sinatra does with his fans.”

After auditioning at the American Foundation for the Blind in the spring of 1937, Scourby was cast in a small part in a recording of “Antony and Cleopatra”. During the following summer he was again, the Player King in a production of “Hamlet” at Dennis, Massachusetts that featured Eva Le Gallienne in the title role. When he returned to the American Foundation for the Blind later in the year to record plays he was told that the company of actors was filled, but that he might record a novel if he wished. That was the beginning of it,” he said in scanning his career years later adding, “The recordings for the blind are perhaps my greatest achievement. Most of the things I look back at in the theater were either insignificant parts in great plays or good parts in terrible plays. So it really doesn’t amount to anything, whereas I have recorded some great books.” The greatest one being The King James Bible.

Meanwhile, Scourby had been keeping a hand in the theater by doing summer stock. He returned to Broadway in late 1946, replacing Ruth Chatterton as the narrator in Ben Hecht’s “A Flag Is Born”, a one-act: dramatic pageant produced by the American League and a dramatization of “Crime and Punishment” at the National Theatre in New York,

Scourby was one of the founders of New Stages, a drama company that went into operation in a small theater on Bleecker Street in Greenwich Village, New York City in the 1947/48 season.

Scourby’s first motion-picture appearances were in two films with Glenn Ford, “Affair in Trinidad” (Columbia, 1952) and “The Big Heat” (Columbia, 1953). He subsequently played a Greek officer in Korea in “The Glory Brigade” (Twentieth Century-Fox, 1953) and a Biblical character in “The Silver Chalice” (Warner Brothers, 1959), and he again appeared with Glenn Ford in “Ransom” (MGM, 1956). Scourby once said, “None of the pictures I’ve done have been really important or very good, with the exception of “Giant.” In “Giant” (Warner Brothers, 1956), that starred James Dean, Scourby played Polo, the old Mexican ranch foreman. He later had a role in “The Big Fisherman” (Buena Vista, 1959). During his flurry of motion-picture activity in the 1950s, Scourby, who had been living with his wife and child in an apartment near Columbia University in New York City for ten years, bought a home in Beverly Hills, California. Calls for Scourby to work in New York, however, soon made the Beverly Hills residence as much a commutation point as a home and so he returned to New York.

Back on the New York stage, Scourby played Rakitin in Emlyn Williams’ adaptation of Turgenev’s “A Month in the Country” and Peter Cauchon in Siobhan McKenna’s interpretation of Saint Joan, both presented at the Off-Broadway Phoenix Theatre in 1956. Again at the Phoenix, he played King Claudius in Hamlet in the spring of 1961, bringing to the role, as Howard Taubman noted in the New York Times (March 17, 1961), the appropriate “fret of fear and decay.”

In 1963 Scourby was given the featured role of Gorotchenko, the Communist commissar who stalks a White Russian noble couple fleeing the Revolution, in “Tovarich”, a Broadway musical by Lee Pockriss and Anne Croswell based on the comedy by Robert E. Sherwood and Jacques Deval, the musical opened at the Broadway Theatre on March 18, 1963, with Vivien Leigh and Jean-Pierre Aumont as Scourby’s prey. “The signal tribute to Alexander Scourby . . . ,” Norman Nadel observed in the New York World-Telegram and Sun (April 2, 1963), “was the hearty hissing opening night as he strolled on stage. In polished villainy, he has no peer. Soon after “Tovarich” closed on November 9, 1963, after 264 performances, Scourby began rehearsals in Los Angeles for a Theatre Group presentation of Anton Chekhov’s “The Sea Gull”, in which he starred with Jeannette Nolan for forty performances beginning on January 10, 1964.

In the early 1950s, Scourby worked in television as both a narrator and actor. One of his constant assignments as a narrator was the NBC-TV’s Project 20 show. He narrated a ninety-minute condensation of the television series “Victory at Sea” for Project 20 in 1954. His assignments for the program included Three, Two, One, Zero, about the atomic bomb, and three religious documentaries using great paintings to tell the Bible story: “The Coming of Christ”, a “Christmas show”; “He Is Risen”, a “Easter show”; and The Law and Prophets of the Old Testament.

As a television actor Scourby has had major roles in dramas presented on such notable programs as Playhouse 90, Circle Theater, and Studio One. He refused to tie himself down to a series, because, as he has explained, “it’s hard to do good things that way.” He, however, accepted occasional parts in Daniel Boone”, The Man from U.N.C.L.E., “The Defenders” and other set-format dramatic shows. Most of the filmed shows were made in California.

Partly to give himself more time on the East Coast, after 1960, he lent his voice to certain television commercials, notably those of Eastern Airlines and was the voice of choice of numerous Advertisers as a voice over for their commercials. Scourby became one of the highest paid voice over talents of his day and if advertisers couldn’t get Scourby they would instruct their agents to get them a Scourby voice. He narrated numerous TV documentaries, including the highly proclaimed CBS TV series, “The Body Human”. His voice until this very day is recognized as one of the best voices God ever created.

Alexander Scourby and Lori von Eltz were married on May 12, 1943. Mrs. Scourby, the daughter of the late motion-picture actor Theodor von Eltz, was an actress known to television, Broadway and motion-picture audiences as Lori March. The Scourby’s had a daughter, Alexandra, born on March 27, 1944. Scourby was five feet ten and one half inches tall and weighed about 167 pounds. His hair was grayish black and his eyes were bluish green. Scourby had no political affiliation and no religious affiliations; although he was baptized in the Greek Orthodox Church and married in the Episcopal (the wedding ceremony was repeated in the Orthodox rite to please his family).

Alexander Scourby died of a heart attack on February 22, 1985, in Newtown, Connecticut at the age of 71. This was one incredibly talented and gifted man who gave much more than he ever got and his voice continues to live on until this very day.

“I offer you the most rewarding gift you will ever have an opportunity to give someone you love … the recording of THE HOLY BIBLE …the world’s most important book, and a gift of a lifetime for anyone to receive.”

We sincerely hope you enjoy our New Digital Products and the all new Scourby You Bible App.