Alexander Scourby was the first to ever record the Audio Bible in late 1940’s and his choice was to use the King James Bible for his recording. At that time, there was only magnetic tape available for audio recording. Over the years the quality of the recorded tape decreased and there was what is called, “bleed through”. This is when audio bleeds into the back side of the tape since it’s stored in a reel, onto the other part of the tape it’s wrapped around, which creates a faint garbled sound and audio noise. 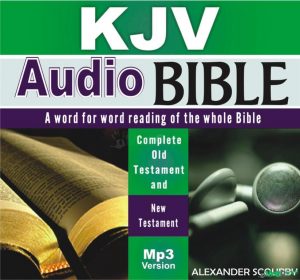 The Scourby Audio Bible Mp3 on digital files was created in 2006 and was made available as a digital download on scourby.com the same year.  Litchfield Associates was the first company to create a Audio Bible Mp3 as a digital download. Users would download the audio files to a computer and then play the files on their computer with a media player.  At that time, in 2006, the company did a limited audio re-master to fix the audio quality. Although that work greatly improved Audio Bible Mp3, it still did not sound like an audio that was recorded in a modern studio. The same audio was that was used in the Audio Bible Mp3 files, was also used in the 2008 Bible App that Litchfield created for the first iPhone.

In 2015, Litchfield made a decision to go through the time and expense to totally re-master the entire King James Audio narrated by Alexander Scourby. The very latest hardware, and the latest audio editing software, was used to re-master the entire 31,102 verses of the King James Bible. The re-mastering project included getting rid of background noise that was from the original tape masters, getting rid of voice bleed through, and equalizing the audio quality and sound in each of the 31,102 Bible Verses.

At the same time, minor audio reading mistakes were corrected where words were pronounced wrong, a word was added or left out, or a word phrase was pronounced wrong. For example, “do they” instead of “they do”, “they that” instead or “that they”, “thy instead of “the”, or “throughout” instead of “through”.  There were more than 100 of these minor mistakes that were fixed by the audio engineer during the re-mastering project. Many asked, how was that done? The audio engineer had to find words, that needed to be replaced in other parts of the narration, and then those words were then equalized and placed into the Bible verse that needed to be corrected. The project was tedious and was finished in January of 2017. The result, however, was that King James Bible Audio Bible Mp3 and the Bible App Audio, after the re-mastering, now sounds like it was recorded in a modern day studio.

The newly re-mastered audio was first put into the Audio Bible Mp3 download files on scourby.com in March of 2017.  In the summer of 2017, both the iPhone and Android Apps were upgraded to include the newly re-mastered audio. This was a once in a life job, and now the Bible App users can have the “Voice of the Bible” sounding better than ever before. Download the Audio Bible Mp3, or the Bible App, today and start experiencing the Bible in a whole new way.